Each of these teachers has provided our instructors and students with direction and expertise. We are indebted to each. 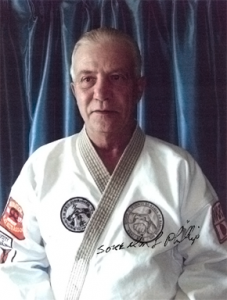 Soke Phillip started his training in Kamishin Jiu Jitsu in 1969 under legendary founder of the system, Senior Grand Master Al Church Jr. On February 1, 2002 Professor Phillip became the 17th inheritor of the system. Nippon Kobudo Kamishin Ryu Jujitsu (Japanese Ancient Martial Way Devine Heart Style) is considered a “non-classical style” that is rich in classical Japanese tradition. This practical form of Jujitsu is known for its flowing movement that takes little to no strength to overcome an aggressor.

SGM Phillip is a much sought after seminar instructor and the Jujitsu teacher of many high-ranking martial artists around the United States. Our own Professor Austin began training under Soke Phillip in 1985 and IBBA’s Renshi James Denning is one of Soke Phillip’s highest ranking Black Belts in Colorado. Master Phillip’s classes are taught in a fun, lighthearted way that makes all students, regardless of age and athletic ability, feel welcome. International Black Belt Academy is honored and proud to have Soke Phillip as part of our teaching staff at both the Fort Collins and Greeley locations. Come try his class! 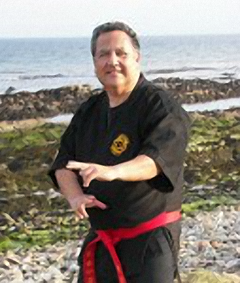 During the early part of the 60s I was lucky enough that my parents knew a lot of quality martial art teachers. One of the very first was Charlie Boy Kalani. Uncle David would take me to the club to work out on the nice makiwara Charlie had on the wall. Charlie also had a piece of telephone pole stuck in the floor with some motorcycle inner tubes tied around it. This was for training working on throws. Uncle David would have me doing strikes and kicks on this bad boy too. Charlie was an amazing teacher and athlete. He would walk across the dojo floor on his hands doing a couple of laps, then a number of push-ups like that – he was also a crack up. My parents really loved him… Later his partner came back from another stint in Viet Nam, Professor John Ah Chin Chow-Hoon. Eventually Charlie would retire from the military and sold the club to B. Baptiste. My parents knew this guy also back in Hawaii and my mother did not really want me training with him – we moved away anyway.

Also at this time until the early 60s, I was being taught Kenpo Karate by my family members – the Cabagbag brothers, Uncle David (he was also my youngest sister’s god father) and Uncle Ronnie (Roland). Uncle David used to own a Chevy Corvair. From standing still he could jump to the top of the car, no problem. From three steps back takeoff he could jump over the top of the car to the other side. They really laid a good foundation for me and gave the advice on how to look for a good instructor later on in life.

Later on I would return to the Monterey area and found out that Professor Chow-Hoon was teaching in the neighborhood. I went down to check out classes to see if I could get in. I did not take any chances with the paperwork, in case my parents did not get along with Sensei Chow-Hoon, so I filled out all the paperwork myself and did not show it to them. Some 7-8 months later after a local luau my parents brought a bunch of their friends over to our home to extend the party, and guess who came walking into our doorway? Professor Chow-Hoon! Right away my heart sunk and my throat tightened up. My mom called me over to meet him. “This is my good friend Johnny. His wife and I are like sisters. You can go and train with him.” I gave him a big hug. He grabbed me by the neck, pulled me over away from the noise and commotion and asked me who filled out all the paperwork for the class. I confessed that I did it and told him my reason for doing this. He understood, but I still had to go to his house to pull weeds the next weekend. That was the beginning of the most important relationship of my martial arts career. 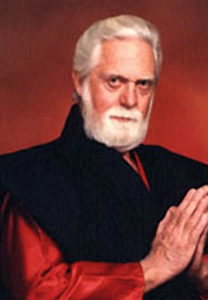 “My first introduction to the martial arts was in 1954 when, at the age of 17, I joined the U.S. Marine Corps and was introduced to hand to hand combat.” Ron was assigned as a military policeman in the San Diego area at the end of the Korean War. “A lot of G.I.’s were bringing back Martial Arts from Okinawa, Japan, Korea, and China. My first Kempo teacher was a brown belt in an Okinawan system and we would train in our off duty time and on weekends.”

Upon his return to the Denver area in 1958 there were only two martial arts schools in the area, both teaching Judo. In 1963, Ron’s Judo and Shotakan Karate instructor returned from a three week trip to California to announce that the school was changing to Kempo and Gung Fu. Ron has been in love with Kempo ever since.

“I was introduced to Mitosi’s Kosho Shori Ryu Kempo in 1981. In around 1986 I merged the Kuo-Jen Lu Kung Fu system which was developed by a dear friend, Sifu Wayne Welsh and his senior student Sifu Ray Tarkington.” That merging gave birth to Gow-Ren-Lu (“The path to becoming a better human being”) Kempo and Gung Fu, the system that Ron has taught since 1994. 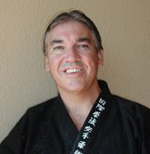 Based in Fort Collins, Colorado USA, Professor Robert Austin is the Master Instructor and founder of International Black Belt Academies Inc. He is also the current President of the United Martial Arts Alliance. Professor Austin is known internationally as a talented, energetic and professional Martial Arts Instructor who has been training in a variety of martial arts since the mid 70’s. Over his career he has achieved Advanced Black Belt and Instructor Ranking in a variety of martial arts including Kenpo, Jujitsu, Kuntao Silat, Escrima, Go Shin Jitsu and TaeKwonDo. He calls the synthesis of these arts International Kenpo Karate Jujitsu and he now teaches his expression of “his teachers’ arts” at seminars around the globe. Professor Austin trains under some of the top Grand Masters in the world and often brings them into his schools. He and his schools have been featured in various martial arts publications both in the US and the UK including the covers of both MA Success and MA Pro magazines. What does all this mean to his students? Simply put, Professor Austin’s success comes from truly caring about his students and their personal growth, not just as martial artists, but in their whole lives. This philosophy has been handed down to all the Black Belt Instructors that teach for him. Professor Austin’s fun, energetic teaching style is infectious and is mirrored by all the instructors he inspires on a daily basis. The lessons he shares are full of variety and depth and are challenging and always a lot of fun! Professor Austin has been changing lives on and off the mat for years and has a passion for making a positive difference in the lives of those he serves. 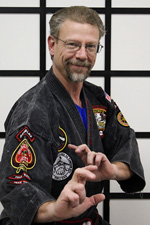 Renshi James Denning is a 6th Degree Black Belt in International Kenpo Karate Jujitsu under Professor Robert Austin. In addition, he is a 3rd Degree Black Belt in Shorin ji Tetsuken do Kanda ha Kamishin Ryu Aiki JuJitsu under Soke Don Phillip. Renshi Denning is the Chief Instructor at the Greeley IBBA School. Mr. Denning is a 3rd generation Greeley native and has trained under Professor Austin since 1992. He is committed to teaching a developmentally-based curriculum which teaches not only useful self-defense skills, but also provides an uplifting and family-oriented environment with an emphasis on character traits, self-discipline, courtesy, respect, self-control, goal setting and personal safety. “After 20 plus years, it is still a pleasure to be a part of a wonderful team of encouraging staff members as well as this wonderful family of students! I am very glad to be the lead instructor at the Greeley school!”